Some Food Cooking, Serving, Ordering Habits that Need a Change 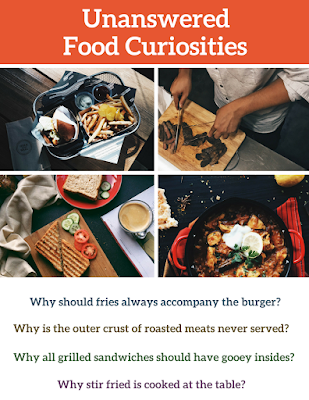 Like anyone else in this world, I love eating, and I also love the mannerisms, the sub-cultures, the unspoken rules that are meant to be broken that are inherent to many cuisines. However, the zone of must-DOs often overlaps with irritation, making me pause and think - who created these self-anointed rules of the game? I seriously don't understand why people should order a butter parantha with butter-chicken or paneer butter masala - there is no such disease that is diagnosed with lack of cottage cheese! Why is that a burger seems more complete with a dumping of fries by the side - is there a reason why I should chew down more fried stuff when I only wanted a good burger? Some food ordering and eating preferences are seriously questionable...

Something similar exists in the common food-ordering practice of clubbing a snack or meal with a drink. It seems a beer, soup, mock-tail or shake is vital to push the food that is not traveling through your food pipe. Why is that a few sips of plain water cannot get the job done? Or is asking for water along with your meal such a gastronomic crime that it portrays you in poor, extremely poor light? If I micro-magnify the picture, there is more that seems to go unanswered.


Keep My Cup of Coffee Simple!


I like my cup of coffee being stirred to ensure the foam is spread and distributed uniformly. I don't like the upper crest of foam that makes the rest of the fluids look like under-nourished cousins.However, cafe latte culture suggests that I am wrong! I am paying for the coffee but God forbid if I ask the crew to stir-down the ingredients that could mean some seriously more manpower hours and some aching wrists! Another tip for those who eat out and never remember to tip the waiter - the one norm that is almost as old as civilized human existence does not seem to have been absorbed comprehensively...do I need to explain WHY!

I also wonder why the mini-grills are allocated at the table for people to grill their own food. We are paying for the service, not to cook the produce on our own. One more thing that often leaves me wondering is the size of spoons. I mean, is everyone supposed to have the same preferences in terms of the spoon size and the curvature of the bowl portion of it?

Some people, like me, have an issue with spoons where the edges are too raised and you cannot get your tongue into the bite. You end-up scoop lifting the bite rather than allowing it to slide-in easily. Some spoons are too small - they are so tiny that you cannot differentiate between a regular eating spoon or the ones used for stirring a cup. Ideally, even an unrefined, uneducated, dirt-cheap dining destination should have some spoon options...even the disposable ones will do! [click here to understand which spoon parts I am talking about]

Email ThisBlogThis!Share to TwitterShare to FacebookShare to Pinterest
Labels: eating mannerisms, eating out patterns that make no sense, food culture that is strange, food habits nobody wants, food serving etiquette