Why John Cena is not impressive as a maturing pro-wrestler? 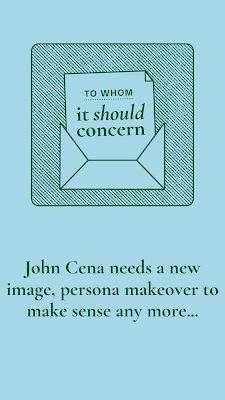 I was just seeing the latest Summerslam match which had Roman Reigns compete with John Cena. Though there was nothing too impressive or outright dislikeable about the match, I must say that Cena is not balancing the maturing act too well. Many former and recent superstars from the WWE have run the seasoned course a lot better. However, John Cena seems to be struggling. His 16-time World Champion credentials stand and he still has the physical strength, but largely, he seems a bit lost, and this is why:

1. The boyhood charm is not working anymore

When John Cena started, one thing that caught everybody's attention was his boyish, cute looks. He seemed a bit undercooked and too much of a collegiate wrestler for many, rather than being a serious pro-wrestling contender. However, as things progressed, the same looks became a bit of a signature for Cena. Even when he completed a decade in the industry, the clean-shaven face, and the short, cropped hair, looked the part. Cena seemed blessed with sort of an anti-aging gene - this is what many people had to say and yes, his chiseled physique only strengthened this image. However, now that Cena is clearly a senior in the industry, the hair is thinning, and the boyish charm is not radiating. The hip-hop mad looks are not delivering. In fact, he seems to be oscillating in a state of confused identities. I compare him to Michael J Fox and Tom Cruise - two more faces that refused to age for the longest time but when aging did start showing up, it just did not blend into their persona. Cena seems to be going through something similar. The white sneakers and the Bermuda-like ring attire seem to contradict that along with Triple H, he is perhaps the most experienced ex-champion right now.

2. He is not really warring - he just happens to be there

This really is not Cena's fault. The problem is with the story writers handling him at WWE. There is no brawl that has Cena at the center of it. Whenever he does show up, he seems to get into a title contention too easily. There is no faction trying to get famous at his expense. He is not taking sides and neither has the personal life storytelling approach been tried on him. John Cena is too big a name to be made the underdog. He is not trending enough to headline a mega event. As a result, his call to the ring seems to be part of an open calculation where the story-makers are perhaps trying to get one more good match out of him. Again, he does not seem to be aging in terms of muscle mass and saying that his body cannot take it would be premature. For Cena to really fit into the current ecosystem, he needs to get involved in an unrelenting war, or at least a feud spread across 2 months or so. As long as that does not happen, he will look like just as an excuse to add some star value to the next big event at WWE.

3. He does not deliver the stardom element Dwayne Johnson does

This might sound a bit too harsh but yes, I have never been a real John Cena fan. For me, the likes of Kurt Angle and Chris Benoit were the real deal. However, the Rock did ensure that like everybody else who watched him, I gravitated towards him for some time. This was inevitable - the Rock remains a standout entertainer. A start package first and a real wrestler later, he can afford to make fleeting appearances at PPV events and still be very watchable. Cena does not have the same, enigmatic presence. We don't expect him to put someone through a cage or be tossed through the ramp anymore. Like I said, with Cena, the lines are blurred all around. He seems agile and strong, and unlike Ric Flair who went through many physical transformations as the years progressed, Cena continues to do all the basics right, but the star power of a Hulk or the Sting just isn't there.

I could be wrong, very wrong but the more I see of Cena, the more convinced I get that he needs to rethink how he wants to be positioned...