Hoping that Bandbudh aur Budbak does not try to Indianize Dumb & Dumber for our Kids! 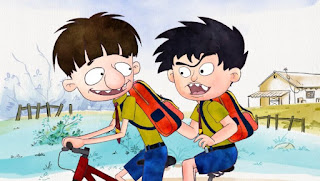 I realize that the Japanese effect on animation is here to stay. Whether it is watching Titoo on Pogo or catching glimpses of the dubbed version of Shin-chan, a shift towards the Japanese method of creating animated content is very visible. The pout of every character is a bit twisted to one side. The mouth is invariably the size of a planet. The weeping is always exaggerated with a fountain of tears. Largely, the characters in this style of animation have become less lovable—less cute than the period when Disney was the global standard for all cartoons. One such, India-specific offering in this genre is Bandbudh aur Budbak. Needless to say that the facial expressions seem strange to me. However, what stands out is the sheer ugliness of the faces. I realize I must sound like a shallow person who seems obsessed with a certain degree of perfection or typicality in everything, but that is not the grounds for this opinion. Bandbudh aur Budbak on Pogo takes the animated ugliness to another level. The teeth are extremely crooked, misshapen to the extent that it looks like the animation creator for these characters is perhaps borrowing from some childhood-day horrors of his own. The clothes are tattered, almost coming apart in places and all the kids in the supporting roles or background scenes have faces that seem to be intentionally disfigured for the sake of recreating what I just quoted above—-the Japanese style of animating, but even the Japs haven't taken things to this extreme. Sometimes, I get the feeling that the idea was to ensure that the viewers get the feeling that none of the characters here ever take a bath. Yes, you can almost feel it which is weird for a cartoon that is engaging the youngest minds across the audience pool. I also think that the idea here is loosely based on Dumb and Dumber, at least the names suggest so. There is a bit of Jim Carrey looks, albeit taken to the childhood years. Even if the creators of Bandbudh aur Budbak confess so, they have done a really, really poor job of recreating close-to-iconic characters.