Remembering ECW: When Pro-wrestling was for Real

I recall Tazz doing the most extreme range of suplexes, coming-up with variations that would put a Brock Lesner to shame. From New Jack to Mankind, from Shane Douglas to RVD – there was something very graphic and lovable about ECW. One big reason for folks from the subcontinent to love this wrestling franchise was that the biggest brand in the biz, WWF at that time, had unchallenged monopoly. Their show was run in a more scripted way. The risks were there to see but a lot lesser when compared to the maniacs who tossed each other around like crazy in ECW. After the acquisition of WCW by WWF, it became clear that ECW was next.

This is was sad for folks like me who like the raw, less organized type of wrestling seen at ECW. Their moves were more spontaneous, the talking a lot lesser and risks were redefined with each passing week. In a short span of time, ECW had made a huge impression, around the US and in the overseas market. The ring’s ropes seemed a bit feeble, the mat colors were more dramatic and the crowds were a lot smaller as compared to any other WWE stadium-scale event and still, ECW had hardcore following. This gave way to chanting, singing, and just screaming whatever one wanted at ECW paper views and the weekly gigs. By the time ECW came under the ambit of WWE, it had lost its raw, animalistic appeal.

The dare-seekers had found asylum in the corporate-run WWE that seemed a hell lot professional, promising longer careers and more coverage in case a wrestler was seriously injured. One Night Stand ECW event signaled the end of an era where a very small locker room, overwhelmed with pure talent and the zeal to impress at any cost faced the most extreme odds without complaining. The financials were a lot weaker as compared to the glitzy WCW but the will to outperform the last event that got the fans asking for more overrode everything with shocking ease. 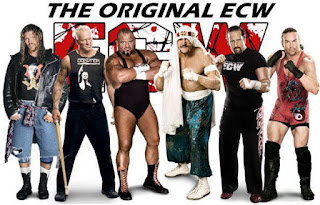 ECW’s premature end also underlined how lifestyle were transforming. From companies to people, things were getting more structured, corporatization had become the norm and professional sports or pro-handled entertainment shows could no longer afford risk that seemed too uncomfortable for livingroom, family-time viewership. Good riddance ECW, it was great while you lasted, will be remembered forever… :(