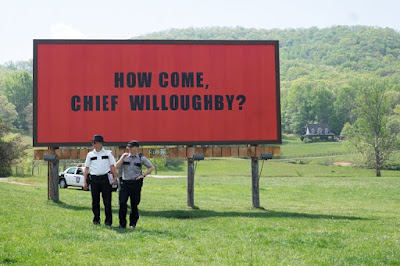 Expect shades of grey, black, and the small town passiveness we found in Fargo, the movie and not the TV series, in what can be described as a bit of a hidden gem. But then, this is not surprising since both Fargo and 3 Billboards Outside Ebbing, Missouri start Francis McDormand and she is as brilliant you can expect the lead star in a Hollywood production. As far as the storytelling goes, it is a bit twisted and weird in places but largely it does a fine job of detailing the grief, anguish, vengeance, and redemption around the rape and murder of a young girl near Ebbing. Playing the role of Mildred, Francis McDormand is very convincing as the remorseful and bitter mother whose daughter has been snatched with utter cruelty in a town that does not care much. More precisely, she seems convinced that it is the police department that has done nothing to find the killers. Her vendetta seems more directed at the sheriff, played by Woody Harrelson, who is battling pancreatic cancer and a sense of guilt for being unsuccessful in making any arrests in this particular case. However, the character that shapes up beyond your expectations and delivers a stellar performance is Dixon, played by Sam Rockwell.
In the first half of the movie, you see him as the typical white-patronizing, a black-hating southerner who does not seem to hide his hatred for people who don't abide by the old-world ways, and perhaps, those who stand up for equality of women too. Rockwell delivers the real punch in the last 15 minutes or so as the slightly reformed policeman who seems to have been given a new perspective in life after Woody Harrelson commits suicide. Yes, there is a beatdown, suicide, murder, and rape and still, a bit like Fargo, there is a bit of dark humor hidden too if you pay some attention to the movie rather than putting out long messages on WhatsApp. I have to confess that I came across this title in an almost futile exercise to find some watchable content on Disney Hotstar Plus. This title was hidden somewhere in the mix without giving any indication that it has received some very good credits over the years. Watch 3 Billboards Outside Ebbing, Missouri for its relaxed pace of storytelling without getting predictable or boring. There is the famous midget angle too and again, the very dark type of humor just might tickle you while Francis McDormand will ensure that you don't want to check out the score of India versus England test match!