Marianne does everything right to deserve a spot on your watchlist or when you want to pick a show without much planning and are not averse to the idea of a bit of horror. What makes this French OTT series on Netflix so watchable? The simplicity of it and its ability to still engage your mind. There is nothing drastically new about the story here. The essential plot is about a demonic presence that needs the main protagonist to keep writing, to ensure she can keep on harvesting more victims. Yes, the main lead happens to be a famous author in this Netflix series and she is plagued by the presence of Marianne. Some people might opine that Marianne was eventually taken off the show from Netflix France but please don't read too much into it. Not all good shows get the mileage they deserve. This OTT series is scary in parts - that must answer the first question horror genre hunting folks might have - is Marianne scary? 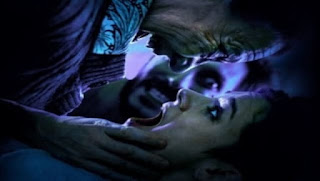 Yes, there is a bit of graphical horror to it but largely the build-up and some chilling scenes spread across the series get the job done. Rotten Tomato says that the series is not very scary and that must be the overall sentiments - expect more spookiness, mixed with some twists and good acting all around. There was some news about Netflix canceling Marianne because it was too creepy for some critics but I don't buy that theory. There is nothing disturbing here. Nothing haunts you after you have closed the laptop flap.

Marianne has the perfect amount of popcorn horror that does not damage your sensibilities. Think of it as breezy horror series that takes Emma to her hometown to get rid of the witch/demon and within this journey, there is some very watchable content. Firstpost.com said that the portrayal of the old possessed lady in Netflix's Marianne is perhaps the most chilling part of the content on offer and yes, it seems like the right conclusion - that lady is indeed scary with her evil smile. I must say there is a bit of teenage horror, pop-fiction feel to the series in some parts and I liked that too. Horror does not need to have child abuse, ripped intestines, and twisted Japanese women all the time. This is French content but has a lot of American similarities. It even tries to be slightly funny in places and succeeds without taking away the fun of this lightweight horror ride.