Did you just mark that wall with your imprints? Don't dumb it up! 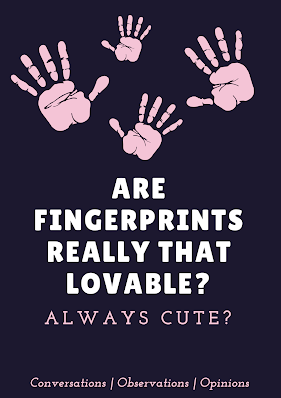 What is it about fingerprints on the walls that make people gush about its authenticity? Just recently, I read an article about how to decorate a room using your handprints. My reaction was a blend of confusion and amazement. I felt confused because the idea of having an entire wall covered in handprints as the accent walls trending did not appeal to me, and more so, I could not understand what is so organically creative about it. I was a bit amazed because some people call it artistic! I can never understand this. Prints of human hands, with the fingerprints, clearly showing, in a color of the paint or pigment, does not create great visuals. There is nothing so progressive about them. I am not complaining about how some people have abused heritage sites with this irresistible urge to leave their imprints all over these places of cultural or religious greatness - instead, I am talking about my failure to really interpret what makes this such a lovable thing to do. No one has majestically different hands whose imprints will create a Picasso-niche imprint. Most of these will be scratched away or painted out someday. As long as they are there, plastered on the surface, they look plain ugly. Some vacationers tend to think of these hand imprinting exercises as a very anthropological way of marking their territory or adding that family aura to something that only society or community actually owns. However, nothing of the sort is the reality. Imprinting your hand over anything, often creating smudges, is no art! I see people do it in the kid's room, and for once, a couple of handprints on a call can look cute. I say so being the father to a 1.8 years old girl whose feet and handprints have never been properly captured. As a couple, we have always planned to do it but just never got around to doing so. Here, the visual appeal of it is somewhat understandable but that too in the form of a few prints only, and not doing the entire wall in a maze of handprints. However, handprinted walls in the kitchen, living room, or bedroom are not macabre or eclectic.