Motel visuals - when our minds are trained to recreate typical images for a word! 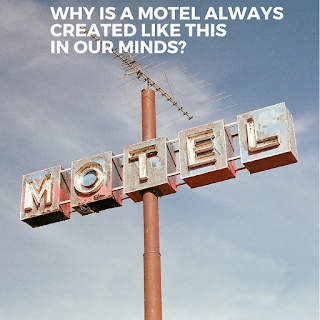 I came across this image when sieving the imagery database maintained by Canva.com. Immediately, I realized that this is the exact manner in which my mind interprets and recreates an image whenever the word "motel" is spoken, heard or read. Why is that? This is the typical American imagery and we have seen it in countless movies and TV soaps. Still, why can't we think of an actual motel building, a room, any accommodation facility rather than this type of signage? I asked a couple of friends if this happens to them too and yes, things are very similar. The only difference lies in the signage of Motel surfacing lighted-up during the night or just like the image here. Sometimes, as people shared, their mind recreates the Motel imagery with a broken, slightly tattered, M or T.


I Started Digging and found some useful information...not much though

In a web published article called "Why your brain just can’t remember that word" by Ewen Callaway, it is clearly stated that the neurological pathway that leads to our mind's capability to retrieve images or a certain word in context with a thought or a visual is almost similar. How stored information is retrieved and processed from the trenches of the brain has almost the same system no matter what type of a person you are. Now consider this, based on this article - if most of us are bombarded with the same kind of visuals and information via digital media or the printed stuff, it is likely that most of us will recall some images, for some words or thoughts, in a very similar manner. This is certain. However, there can be some differences.

The same study quote above talks about tip-of-the-tongue experiences {ToT} when words suddenly drop dead from our mind. These are very common words too. This is one of those scenarios when the complex brain wiring malfunctions. The study says that a bilingual or multi-linguist has more chances of showing tip-of-the-tongue word failure experiences as compared to the average Joe. Why? Due to more, similar sounding and similarly spelled words competing for attention.

Now, try to use the same explanation for my query - the human brain, the average Joe brain, has a greater tendency to retrieve the same or almost similar images for the word "motel" if the pictorial context fed to the mind is almost the same, via movies, TV, books, comics, web images, etc. Yes, there will be some people who might recall different images - just like multi-lingual folks are more likely to have memory fade than mono-linguals.

This also proves that our minds are dramatically and unbelievably the same but the smallest differences can create major personality or behavior differences!

Shared:
Thoughts about how life could have been better, without the bitterness
How dreams too can be summery or wintery
Images closely related to my dreams - wandering thoughts in images

Email ThisBlogThis!Share to TwitterShare to FacebookShare to Pinterest
Labels: brain fade, how mind retrieves images for a word, how we think of images for a thought, motel images in our minds, Snippets: Compressed Dialogue