Case of DIY Warriors: Some Men Can Afford to be Anybody’s Nemesis! 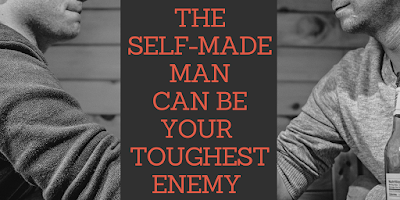 Not all of us can claim that our present lifestyle, academic progress, workplace achievements, relationship status, reputation of being a good sibling or a son and the newest business venture has been a totally independent journey. Most of us have taken the liberty to extract that extra effort from someone else, ring-in a few favors or managed to polish some egos to push our life’s cart. However, this is not the case with a truly self-made man. His credentials are entirely different. He wears the scars of failed attempts with upmarket pride. Even the manner in which he orders food has this air of conviction, as if he owns the moment, as if not tending to him is breaking a social law. It seems that with time, God has been arm-twisted into helping him along the way, bowing to his will.

The self-made man is most likely to be a bit rude but this too seems forgivable. His annual income might seem meager and his shoulders might be slender but he can take upon the toughest son of a bitch out there without thinking twice. His physical strength, his immunity is boosted by this self-belief which functions like an overpowering steroid. Crossing paths with someone like Him is not for everyone. These are not easy people to argue with, even the shortest verbal spat can make you feel humbled, almost psychologically emaciated. I envy such men. Their ego is not floating on some make-believe cloud. I come across them rarely but when I do, for a couple of minutes, I am in awe. I aspire to be like them but a few minutes after these moments of possible grandeur, a text message awakens me to the reality – you have monthly bills to pay for a home that your father gifted you!

Email ThisBlogThis!Share to TwitterShare to FacebookShare to Pinterest
Labels: How to be a truly self made man, living an independent life, Snippets: Compressed Dialogue, standing on your own feet, thoughts from a wandering mind