"Don't Dad Me" - Martin Crane is No More! RIP Friend 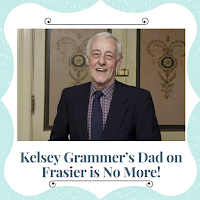 This was when Star World was just getting serious about serving the Indian audience content that had some degree of intellectualness - Kelsey Grammer addressed this with Frasier. The character was someone who would speak with a real accent, and never let you feel that he was merely reciting the lines. The props were very real, the studio production aura wasn’t there and the personas who fueled Frasier’s interactions had one very special person – his dad, played by actor John Mahoney. Now into his retirement years, with a hyperactive dog who always needed attention, Mahoney’s on-screen avatar was rather matured, living with his son and trying to soak-up some good moments in his grey years.
Mahoney will always be remember as the father of Frasier Crane and though he appeared in many movies and sitcoms, the role of Martin Crane will continue to stimulate memories of a time with TV content was neck-deep in substance. With a crisp voice, a war veteran aura about him, Mahoney was very convincing. Somewhat skeptical about his son, Niles Crane, Mahoney seemed like an everyday father, someone across the street who had paid his dues and imbibed years of maturity. So long old friend, you were responsible for keeping me hooked to the TV on some nights that would have otherwise been intolerable…RIP.