Sleeping with a Collar? Not my cup of tea!

Needless to say that I have had falling-asleep issues. These have oscillated from being awake at night like an owl to having the most frightening thoughts ruminating in my mind. The result has been what I call superficial sleep. The sleep here used to be slightly disturbed with some depressing thoughts doing rounds in the head. The result was this feeling of something tied to your upper back and forehead – the feeling was not perhaps as acute migraine bouts but it was awful. Now, during this phase of high sleep sensitivity I developed another habit or a handicap – I just couldn’t sleep with any type of nightwear that has anything alike a collar.

Everyone can have a personal, rather weird reason for Insomnia Like Symptoms

For some weird reason, I need my neckline to be free from any type of overlap. This holds true even during the winters when most people wear layers of clothing and often, this includes something with a bit of coverage around the neck. This habit became a serious part of my everyday sleeping regimen, and now I just cannot let go of it. These days the tolerance for with-collar outfits has increased by some margin, but not too much. I understand this is a rather strange reason for insomnia type of symptoms.

I still have issues if the smallest, softest thing is rubbing against my neck or throat area. Is it weird? I think YES because I have seen folks sleep with warm shirts that have soft collars and sweatshirts with hoods that size-up to something quite substantial under your head. Though am blogging about this, I don't plan to get rid of the habit, i.e. not take the pains to overcome this – why? It probably forms a part of my somewhat, borderline lifestyle habits and if I can work around it without harming my sleep patterns or the sleep of those in the room, then why bother changing it?

When I actually had OCD, I had developed a strange sleeping ritual. This included checking on all the lights, checking on my father, and ensuring that the path from mom's bed to the bathroom was free from possible threats like innocent slippers, meandering socks or casually tossed around towels. The reason? When my maternal uncle, Mama, passed away, I developed this weird feeling that if I did not check upon my father, seeing whether he was breathing, I would lose him too. My mother had developed a serious mobility issue due to her shoulder injury that was caused by a slippery floor. This made me think that removing all potential land mines that could make her fall again had to be removed with surgical precision. All these activities meant some unrest as the time to go to bed drew nearer. Often, if the sleeping ritual did not proceed as planned, my sleep would be disturbed too. Now, these OCD days surface for a maximum of 2-3 instances across 4 months or so which is almost non-existent volumes...but then, I shouldn't be patting my back too much! 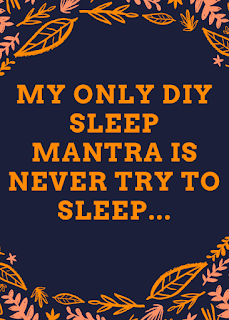 Updated on January 31, 2018: Sleep Troubles I Forgot to Write About
I must have been in a hurry to forget this - there were two more sleeping patterns/habits during my early childhood days that underlined my sleeping issues. For starters, I would rotate throughout the bed, doing some serious soccer-style legwork across the top surface, kicking away bed sheets and even my sister! I recall being kicked out of the bed who had been victimized with my super-kicks. Another memory is that of salivating with the mucous dripping from the side of the mouth and delayed stoppage of bed-wetting habits. All of these point towards sleeping issues that are generally over-sighted among children. I am not saying these symptoms mean there is something wrong with your kid but you might want to introspect a lot more if there is any underlying issue.