No Monkeying Around: Are you eating a banana or hot dog? 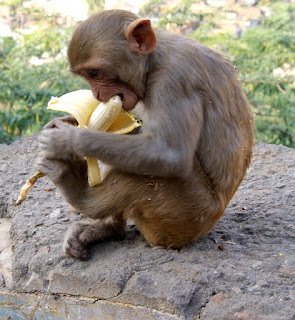 Call me crazy for observing and commenting about the smallest things that happen around me but the fact is that I just cannot help it. A few days back, I saw this guy perched on a small slab like thing along the road, eating a banana. There is nothing serious or wrong about consuming a fruit that is extremely high on carbs, potassium and sodium and is known to help people relax better and sleep. However, there was something odd about the way in which he was holding the banana, fully peeled, held horizontally, just like we eat hot dogs. I have seen many members of the ape family, particularly monkeys, eat their banana in a manner that is far more groomed, peeling away the fruit and eating it one or two bites at a time.

What type of conclusion can we draw from this small mental exercise? 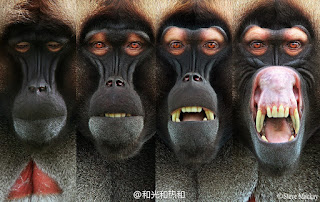 Some More Monkeying Around: Sharing Things Related to Monkeys that Made it to My Mind

Monkey-like facial structures
I am not being racist or trying to call someone ugly but some people have a very strong, almost obtuse, facial similarity to monkeys, complete with the wide-eyed looks and a short chin. I tend to capture small images of such folks in my mind - yes, the back camera of my mind works rather well!

Monkeying at Red Light Stopovers
This has been happening for almost 10 months now. At most traffic lights, we are greeted with seriously starved, hapless monkeys, and their kin, pulled around by beggars who are either children too young to realize the cruelty of this daily chore or adults who have shut-off the humanity button. Perhaps hunger prevails over everything else but then what about monkey-tugging beggars who have no bodily handicap and look reasonably fit?

Monkeyed by Moha
This might be getting too close for comfort but my wife often says that I sometimes resemble a baby monkey, complete with the pity expressions and hungry eyes. Not sure how many people in my team would agree - for them, am more like a bear trying to take a bite from their pie of happiness! 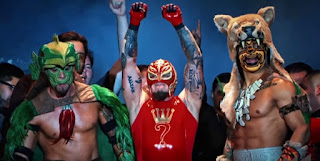 Mexican Lucha Monkeyness
I am new to exploring other, regional wrestling syndicates. The reason was simple - WWE has been getting more dramatic, less raw for all the wrong reasons. They are losing long-term patrons like me. I started following wrestling in 1991 when Hogan had exited and entered WCW. Lucha is on a much smaller scale. It has these crazy, mask-covered warriors who undertake the most hideously risky moves. Some of these acts have acrobatics and senses-defying leaps and twists that would do any ape family proud. Due to their smaller built, some of these Lucha wrestlers imitate the apey movements - becomes all the more monkeyed when they have these short pieces of costumes along the back that in turn have small, tail-like projections!