The Cleavage Watchers: No Dearth of Voyeuristic Enthusiasm 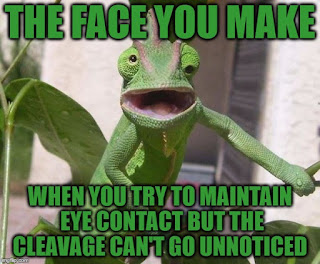 This won't be surprising to those who have the slightest bit of observant sensibilities. However, it could be shocking to those who remain lost in their own world, within the confines of their utterly blissful ignorance. In a way, I actually admire the latter kind for they don't realize the absolute mediocrity and retarded mindsets that surround us. By now, you would be wondering what am I blabbering about. I realize the introduction to this discussion is a bit too long but I just wanted to create some sort of a cerebral platform before I dive into what is a shameful fact about riding the Delhi Metro, i.e. the presence of slightly perverted, overtly enthusiastic voyeur lovers who are always on the lookout for an opportunity to glance down a lady's cleavage. Yes, this also suggests that I tend to look around too much but I don't go around eye-balling cleavages unless they are shoved in my face, in an unavoidable and sudden manner.

[Suggested Reading: Why Adhaar Card is Not Worthy of Our Troubles]

Yes, I am a guy and like every other man with a normal degree of sexual orientation, often the eyes do tend to get attracted towards shapely, voluptuous women. However, the intention is never to stare at them or remain perched upon my heels, just waiting for an angle that would reveal more than what is considered "decent". The use of double quotes here is rather necessary since, in today's Delhi, the interpretation of this word has taken a rather strange aura. It seems that the slightest show of skin by a lady is considered as an open invitation to be peeped, stared and comment on. Though this cannot be a generalization for every guy who travels in the Delhi Metro, it is cold fact that cannot be argued. I have noticed small groups of guys signaling to each other as to whom, when, and how they should peep and be rewarded for their efforts. This has got nothing to do with sexual liberalism. This is just a form of unashamed and repulsive behavior that has seeped into Delhi's once-progressive culture, courtesy of the continued inroads made by the migrants who think that being in the capital city will amount to "capital" gains. Not that those who have been historically rooted in Delhi are performing any better. I have to admit that blaming this culture decadence only on immigrating groups from all over the nation is a biased view. While I had it for some time, I now correct myself. We, the residents of the city, are a shrinking minority. No matter how much we shout and protest, the voice of our rights is getting increasingly inaudible in the chorus of people who think Delhi is the capital of free-for-all territory. I am very sure once normal lifestyles resume in the post-COVID era, this voyeuristic tendency too will return without any restrictions...this is just a temporary pause!

Email ThisBlogThis!Share to TwitterShare to FacebookShare to Pinterest
Labels: Delhi and women, riding the delhi metro, women in delhi