Big sandwiches are good but when they turn meal-sized, are we still eating them like a sandwich? 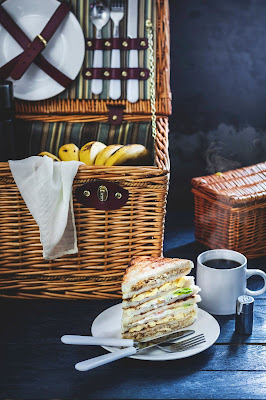 The other day I was at Burger Place, Rajouri and I ordered the double-egg burger. Here, the burger patty was really big. It had been filled with poached eggs and lots of green veggies. The result was a true gastronomic delight. The eggs were slightly mushy and when pressed slightly almost hung tightly to either side of the burger buns like some industrial adhesive and the flowy sauces and cheese things were equally warm and orgasmic. However, I had a small issue. I just couldn’t eat the burger like a burger.
It was too big. It was oozing too much of the good stuff. I could not afford to press and kill my vulnerable patty. And I hate when the cheese starts to drip. So, the solution was finding refuge in a plastic fork and slowly eating away the hand-sized burger. Did this ruin the taste? Not really. I should say not at all. In fact, having a burger like a plateful of the meal was a refreshing experience. Now, when I compare this with some of the sandwiches I come across in Delhi’s cheese-based eat-out locations, it seems that eating these sandwiched, held-up like the traditional way of eating your bread is not really practical.
You need to fork it down, pull and slice it off otherwise you might look like a Neanderthal or some starving refuge. Either way, you are not going to create good social impressions. Anyways, having all the ingredients spill out, almost pour down the fingers is not aesthetic in any way. But then, there is another issue to manage—does eating a sandwich or a big boy burger with a fork make you look pseudo and desperate-level fashionable wannabe? In some ways, I think yes but then, I couldn’t care less. I will eat my food, the way I want, without giving a fuck about what the bystanders, onlookers, and opinion-ridden souls have to say about it! This is not talking about what is trending in the world of take-away or how oversized, monster burgers are being talked about so much on food channels/media? Believe this - run a Google search and you will get tips on eating a massive burger. Again, I don't understand the etiquette of it, and more importantly, if it delivers anything besides the initial, visual engagement of a few minutes and then, it comes down to fighting the monstrosity, continuously reminding yourself that this is famous, expensive, and perhaps, so-worth-it!
Read this about how big burger ideas are standing out - they are calling it stunt burgers:
At home, Moha has tried the multi-tiered sandwich and while I enjoy it on some occasions, largely I feel it creates a mess. One fundamental problem with it is that while the ingredients are carefully and painfully, and slowly, layered on top of each other, taking care of the dry layers being sandwiched between the saucy layers, a couple of bites destroys the entire work put into it. Even worse is the fact that you have to gather the spilled out ingredients and try to put them back between the layer of bread. The entire experience makes me realize that looking at massive, overflowing burgers or sandwiches is perhaps good for gastronomic journalism and vlogging-focused gourmet marketing but it isn't a real diner's delight.
Read this about a club sandwich that is not emaciated, lean, or too athletic. Instead, it has the right amount of bulk without trying to look visually overwhelming and still delivering the perfect blend of all ingredients in every bite.
Yes, there is always a section of people amongst us who perhaps equate the mountain-sized preparations with money well spent but still, I cannot find any sense to it. In contrast, the club sandwich is a lot more civilized, and practical too. Though I don't find the ongoing arguments about the genesis of the club sandwich and its history, I would say it handles the balancing act rather well. There are just about two big layers between the slices of bread. You get a mouthful of the veggies in each bite, delivering the perfect crispiness, and the sauces are not running down like an overflowing dam.

Which country has the biggest sandwiches?

I'm not sure which country has the biggest sandwiches, as the size of sandwiches can vary greatly depending on the type of sandwich and the region in which it is made. Some countries, like the United States and Italy, are known for having large sandwiches such as sub sandwiches and hoagies. Other countries may have smaller sandwiches that are more traditional to their culture.

Traditionally, how many layers are there within a sandwich?

Traditionally, a sandwich is made up of two layers of bread with fillings such as meat, cheese, and vegetables in between. These fillings are often referred to as the "filling" or "filling layers" of the sandwich. Some sandwiches, such as the classic BLT (bacon, lettuce, and tomato) sandwich, may only have one filling layer, while others like the Club sandwich or Dagwood sandwich are known for having multiple layers of different fillings.

What revolutionized the modern sandwich?

The Industrial Revolution of the late 18th and early 19th centuries revolutionized the modern sandwich. During this time, new technologies and mass production methods made it possible to produce and distribute bread on a larger scale, making it more widely available to the working class. This, combined with the invention of the mechanical slicer in the late 19th century, made it easier to prepare and consume sandwiches. Additionally, new forms of preservation such as refrigeration and canning allowed for a wider variety of fillings to be used in sandwiches, making them more diverse and widely available. This led to the sandwich becoming a staple food for the working class and eventually becoming popular worldwide.

It's worth noting that in recent years, fusion sandwiches are becoming more popular and are an example of Asian-American sandwiches.

Can a sandwich be considered a full meal?

For example, a sandwich made with whole grain bread, lean protein such as chicken or turkey, vegetables like lettuce and tomato, and a small amount of healthy fats like avocado or hummus, can be a very nutritious and satisfying meal. Additionally, the size of the sandwich can also play a role in determining if it can be considered a full meal. A large sandwich with multiple layers of fillings can be more filling than a smaller sandwich, making it a more satisfying meal. It's also important to note that a sandwich can be high in calories and fats if it includes high-fat meats, cheese, and mayonnaise, so it's important to be mindful of the ingredients and portion sizes when considering a sandwich as a full meal.

Why the sandwich became a favorite workplace food?

The sandwich became a favorite workplace food for several reasons:

Convenience: Sandwiches are easy to make and easy to eat, making them a convenient option for people who are looking for a quick and portable meal. They can be made in advance and taken to work, allowing people to eat on the go or at their desks.

Variety: Sandwiches can be made with a wide variety of ingredients, making it easy to find something that everyone will like. They can be made with meat, cheese, vegetables, and a variety of spreads and sauces, allowing for a lot of creativity and variety.

Affordability: Sandwiches are relatively inexpensive to make, and can be a cost-effective option for people who are looking for a budget-friendly meal option.

Customizable: Sandwiches can be customized to suit individual preferences and dietary restrictions, making them a great option for workplaces where employees have different needs.

Versatility: Sandwiches can be served in different forms, whether it's a sandwich roll, a wrap, a bagel or a croissant, they can be enjoyed hot or cold, toasted or plain, making them a versatile meal option.

All these factors made sandwiches a popular and practical option for many workplaces, as they can be easily prepared, transported, and consumed without too much hassle, making it a perfect option for people who are looking for a quick, easy and satisfying meal during the workday.

Should the sides of a sandwich be soft or hard?

How has the sandwich evolved in the last 4 decades?

Global influences: Sandwiches have become more diverse, incorporating ingredients and flavors from different cuisines and cultures around the world. For example, sandwiches like the banh mi from Vietnam and the shawarma from the Middle East have become popular in the United States.

Health trends: As concerns about health and nutrition have grown, sandwiches have evolved to include more whole grains, lean proteins, and fresh vegetables, and less processed meats and cheeses. Many sandwich shops and fast-food chains now offer healthier options such as whole wheat bread, low-fat meats and cheeses, and more veggies and salads.

Gourmet and artisanal: There has been an increase in the popularity of gourmet and artisanal sandwiches, which often feature high-quality ingredients and unique flavor combinations. Many restaurants and delis now offer sandwiches with unique fillings and breads, such as artisanal cheeses, homemade spreads and sauces, and locally sourced produce.

Plant-based options: In recent years, there has been a growing interest in plant-based and vegetarian options, which has led to an increase in the availability of sandwiches made with plant-based proteins, such as tofu, tempeh, and seitan, as well as plant-based meat alternatives.

Overall, the sandwich has become a more diverse and versatile food, reflecting the changing tastes and preferences of consumers, and the advances in food production, preservation, and delivery.

Email ThisBlogThis!Share to TwitterShare to FacebookShare to Pinterest
Labels: catching up with food trends during pandemic leaves, food fashion trends, is eating a burger with a folk being pseudo, is eating your sandwich with a folk being a snob, Snippets: Compressed Dialogue