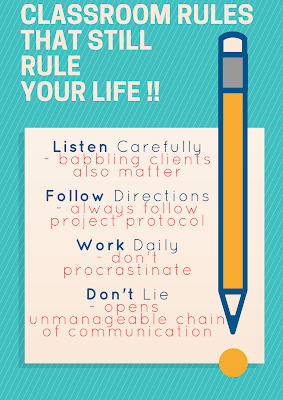 Our moral science classes were usually held in the first period of the day. In a catholic school, as a fraternity, we were big on manners and learning the good things to do. At that time, it seemed a bit too vague, often about things that we really didn’t practice but yes, it helped to draw some sort of line between the good, the bad, and the reasonably acceptable middle, grey zone. These lessons were usually forgotten and often the classroom aura was more of winding down for the day to follow with many mates catching up on quick bites and pending homework copies. Things that were transmitted to us were usually never received or processed. Now, after nearly two decades, it seems that many of the lessons that we didn’t bother to learn during that period are waiting for their share of the spotlight. We were told not to lie and yes, I learned this lesson rather well before giving it away when handling the type of projects that were too big for the teams I managed. The lesson of one lie opening a box of more dicey stories, tales sprinkled with misleading creativity followed. Soon I realized that no matter what the Management or the workplace buddies say, don’t lie to your client – this will blow up in your face in the most hurtful manner. The smallest lessons about starting the day in a refreshing manner, always taking the time to tidy up make more sense now, in my middle-30s when there are a million tasks to manage and not starting the day on a positive note means daylong anxiety and unwanted stress!
If only, at that time, someone could have schooled in the wisdom of teaching these lessons as life-essential skills and not just another round of classroom learning.

Email ThisBlogThis!Share to TwitterShare to FacebookShare to Pinterest
Labels: life lessons for the working man, moral science lessons you did not learn, realizing, Snippets: Compressed Dialogue