Not Just a Tattered Scooter, this is a bygone era on two wheels that is crumbling… 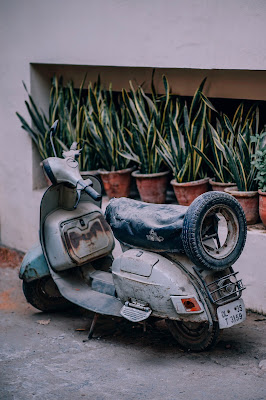 Owned by my father, shared by my uncles and some neighbors too, ultra-utilitarian and never to fall sick – these were the defining features of the scooter that now bears a skeletal look of its glorious past. Every inch that is now rusted once carried the weight of a two-child family with ease. The ragged seats were once the envy of onlookers and would shine proudly with the smallest wipe. Just like my father, it is now bent on one leg, not handicapped but fully aware that the footsteps now need to be measured, best restricted. The forehead like headlamp now wears a dull grin, telling me that even the retirement years seem overwhelming and the journey is now nearly complete—the ride was worth the pain that this current state of shambles inflicts…

Tracing footsteps to the discussion...

I often argue with my father as to why he doesn’t sell his beloved Bajaj scooter. Obviously, it should be sold as scrap. It looks like crap, having played host to every road animal that co-inhabits the city, used as a nursery, a launching pad for critters and even a stoic armrest to folks who laugh at its current state. I guess I can never understand the feelings that must be associated with this two-wheeler. I can only imagine them because I know that like my parents it belongs to an era where hard work was rewarded, honesty was valued, families actually lived together – not just sharing a living space, and a 9-5 job didn’t define your lifestyle.

Counting some of the best Bajaj Moments

I still recall how my childhood, and that of those who once piggybacked on scooters, had plenty of Bajaj moments. This was no ordinary means of commuting. It was a family possession, a conversation starter, iconic & classic at the same time and faithful like a stallion with horsepower of its own. A Bajaj ride with me seated along the wrong axis, i.e. with my back against my father’s back, was adventure. Counting the number of shadows and trying to define them as the scooter rode on empty roads came naturally to me. It made me feel cerebrally gifted.

My Bajaj: a spaceship, pirate carrier, tanker, a means of inflicting destruction

I must have covered a thousand miles seated on the pillion, or standing right under my father’s chin. My position must have resembled a bear cub ducking under its parent’s chest. With my father’s hands stretched out at either end, I felt secured. Nothing could harm me. After all, I had speed that cut through wind. I had burly hands that were so strong and stoic protecting me, and I was on the lookout for pirate ships and possible conflicts, ready to remind my father about honking more or speeding-up. These were some basic rules to a Bajaj adventure. Anyone my age who didn’t know these was reprehensible and the disgrace could be unbearable.


Growing with it & letting it grow on YOU

Later, as I gained vertical growth and shoulders became broader, I was trusted with carrying more household essentials, many utilities stuffed in polythene bags that I now carried in either hand. Carrying more was a matter of pride. Sometimes, the polythene cutouts would hurt. But this did not mean defeat. The ability to withstand it and still make it home with the groceries intact was about fueling my ego. When I stepped down from the scooter after such voyages, I felt stronger, a lot nearer to becoming a man.

When Worlds Collide, We Drift Apart

Somewhere down the line, Life handed more layers to create my life and somehow, they started insulating me from things that should have mattered the most. Interestingly, most guys my age did the same. Studies, girls, and growing seemed more important. The model of our car seemed critical while having a scooter was now about owning something for last-minute emergencies, for situations where the humble, dutiful family scooter would be used again.

Can the past be awakened?

This is like the perfect catch 22 situation. Our Bajaj is beyond repair. Mechanical redemption would cost us more than double of what we paid to bring it in the first place. Years of neglect have pushed it beyond restoration of any type. I am guilty to some extent and so is my father – when it first entered our family circle, we had an unspoken bond – we will lookout for each other! Then, what happened?

I know I am not the only one

If the 80s was your childhood, you know the simplicity of life I am referring to…anything and everything that came-in later.

This sense of nostalgia is not uncommon with Bajaj scooters that are easy to find in almost every locality of Delhi except for families who might feel ashamed of what now looks like a transportation medium worthy of people who dig into manual labor to get their daily bread. When I look back now, this isn’t about the deterioration of a classic scooter. It symbolizes of how we have evolved and at what cost. Just like my Bajaj, everything that was about holding onto the goodness of an era has become secondary. I can only wish that more people, across more families, owning something similar, will take cognizance of what is happening and at least try to restore some of it…”some” is good enough!

Email ThisBlogThis!Share to TwitterShare to FacebookShare to Pinterest
Labels: how things have changed, recounting memories, reliving childhood, retracing growing up with baja scooter, your baja story