RAID – Does Not Attack Your Sensibilities, Neither Is It Pretentious | Worth Trying! 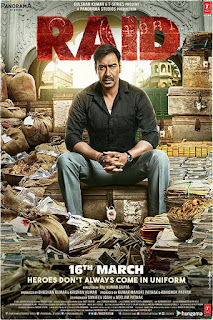 I have to confess that often, I tend to over-adjecti-fy the cause of criticizing something. Also, am not a big fan of singing hymns when I appreciate someone - people call me disapprovingly polarized and sometimes, I have no defense! However, when it comes to RAID, my good, bad and the ugly neurons worked in perfect tandem to watch and somewhat, admire the movie. For starters, it does not try to be a Karan Johar type of movie that shoots across global locations and dresses-up megastars with costumes, role-plays and borrowed styles that just don’t seem to sync. RAID is slightly under-cooked. This actually helps to make the movie watchable. The story isn’t something worthy of being a conversation-starter. You might find it surprising but there are no raids as such in the movie – yes, RAID is a singular in every sense. The entire plot is knitted around a few days of income tax department’s invasion. The perpetrator is Saurabh Shukla – as vile and well-groomed for this role as you can imagine. His dialogues are interspersed with just the right amount of facial expressions that oscillate from disgust to bouts of violent anger and reluctance to accept the reality.

Reviewing RAID in a hurry!

The big surprise is Ileana D’Cruz – for some un-decodable reason, she seems to have slipped into the simpleton of a character's shoes in a sublime, unsuspicious way. Her performance seems a good 5-6 years beyond her realm of skills we have seen so far. The songs seem unnecessary but Ileana carries her part of the story rather well. There is no melodrama. Her sorrow related with Ajay Devgan’s unrelenting transfers are real. You can relate with her complaining about their life being repeatedly uprooted. How good is Dev-Gun? Fits the role perfectly. Think of a pizza slice that has a well-baked base, thin crust, lots of cheese and some spicy toppings too without the pointless addition of cottage cheese or an overkill of vegetables.

That slice, which feels so good to look at and eat from, is what Devgn is all about in RAID. He could not have asked for a better role after the most recent from the GolMaal series, which by all standards, was a big letdown. We cannot watch someone so intense fade into the background of forced laughters and over-dramatized situations. Ajay Devgan needs his screen space, he commands it and a movie which does not gift him the perfect seat on the pot, allowing him to spend time reading the headlines, smoke a couple, and take the pleasure of filling the crapper slowly and using the flush as many times it seems unnecessary, does not justify his inclusion!