Why Fries? Are we ruining the entire burger experience? 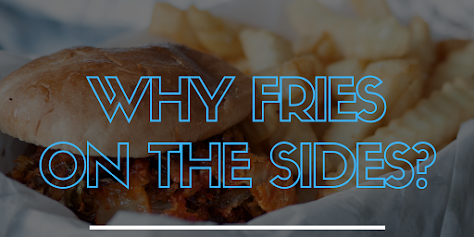 This question has always been there in my mind. Am already having a bun stuffed with fried patty and the stuff is dripping juices and sauces and dressings. I am getting a mouthful of bites with plenty to chew. What is eating is not light and seldom needs a follow-up or sides to reach satiety levels. Why do I need the fries? Why would people even ask for fries, let alone pay for them rather than requesting a better-filled, more saturated burger experience? Usually, these fries feel sloppy and an unwanted add-on. I don’t mind a bit more veggies in the burger as they add more crunch to the bite. Fries don’t make sense because I don’t want to pause during the burger-eating expedition and deviate from what the taste glands are experiencing.

For that matter, Coca-Cola remains a big spoiler for me if someone really wants to discover the real flavor of the meat patty or find out how under-prepared the bread is. For the calorie trackers, do you really want this addition when you are out to enjoy a wholesome burger? For the burger(paths), do the fries really enhance or uplift the eating experience? For those who have burgers just to fill their belly, is it necessary to glutton the fries rather than perhaps follow up with a single serving of chocolate ice cream?

Email ThisBlogThis!Share to TwitterShare to FacebookShare to Pinterest
Labels: blogging about everyday eating choices, do you want fries along with a burger, food bites, foodgasm, why fries with your burger