What if you didn't have a bestie? What if the everlasting friendship never got underway... 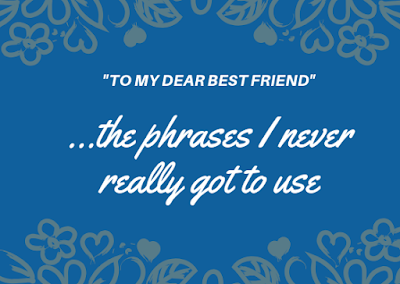 So, how does it feel to have one for the majority of your lifespan? Isn’t it nice to have someone whom you grew up with and who won’t leave your side? These are phrases reworded somewhat incorrectly but borrowed from appreciated movies and books. They talk about besties and best friends. They talk about bonds that don’t weaken as time passes, as Life takes a toll, even when it seems there is nothing much to gain from. I have come sporadically close to feeling something like this but realistically, never really got there. This is weird considering I was among the most liked fellows in the group. I was a favorite among the aunties, uncles, and teachers. Cousins were envious of me and my parents were always proud of me.


The reason to blog about such things actually stems from two reasons. One, I see that many people have grown up with real friends, not just those who share a pint, but real friends who are like family, and friends who enact the role of a family member during times of a crisis - like the crisis that spread when the pandemic hit us. Secondly, there was this nice article online, on the Mighty, which talks about how it affects your personality when you grow up chronically lonely, and especially, without real friends. The only thing I can say in my defense is that it was never a plan or an attitude to detach myself from the world. Stepping into my 20s, it just kind of happened and it took me more than a decade to understand that not only do friendships change in adulthood, this phase of life is also when having better-than-casual friends really makes a difference.
I grew up in reasonably decent neighborhoods and always had some spare money to have some impromptu fun with weird things bought off the street. There was lots of parental control but I could always steal time away from their span of observation. But despite so many normal highlights during my growing-up years, I could never really find a best friend. I came close, very close at least a couple of times and then something self-destructive took over. I don’t know about sleepovers. I don’t know about being the best man or being called from overseas by someone who shared your lunch money. Now, when I heard about best friends, I wonder, what is it like—is it just hype or do such friendships really exist?
All of us have heard those wise words about how pals for a lifetime really matter. Guess I will never know what these folks are really talking about…I found a great friend in my Wife and she is the only one who really gets me. That is my bestie!

Email ThisBlogThis!Share to TwitterShare to FacebookShare to Pinterest
Labels: friendships in adulthood, growing up chronically lonely, growing up without a bestie, relationships that cannot be defined, what if you did not have a best friend