SO Hate Me for Carrying One…somewhere in my daily gear 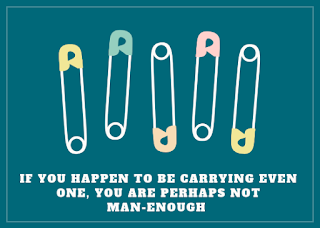 This might sound contorted and tweaked in the most pessimistic way but the opinionated demographic that I have repeatedly interacted with at workplaces suggest that this is by far, the most common perception. A safety pin has been with me at various stages of my life, usually pinned into my schoolbag or college gear by my mom. What once started as an irritating habit that she could not let go, of slowly turned into something I started associating with her. I have come across safety pins to be ultra-handy at my work desk, in everyday life situations, when traveling, and when preparing myself for a day of repairs at home. Still, the usual perception is skewed and unreasonable in the most comprehensive way. It seems like the work communities am talking about are uninspired by how I relate a safety pin in my office drawer as a connecting medium with childhood memories and perhaps as a part of everyday life management. For me, it happens to be a very versatile tool. I have never been ashamed of spotting one in the depths of my office carry. The opinions associated with a man carrying it are the symptoms of a much larger problem. I would call them downstream symptoms of some things engraved in our mindset during the growing-up years. Is this about being urbanized or culturally well-endowed? Certainly not!

What is the history of safety pins?

The safety pin is a simple but versatile fastening device that has been used for thousands of years. The earliest known safety pins were made by the ancient Greeks and Romans, who used fibula, a type of safety pin, to secure their clothing. These pins were made of bronze or other metals and were often decorated with intricate designs. During the 19th century, the safety pin as we know it today was developed. Walter Hunt, an American inventor, is credited with creating the first modern safety pin in 1849. He intended to use the device as a way to secure the clothing of his children, however, he sold the rights to the invention for $400 to pay off a debt. In the late 19th century, safety pins began to be mass-produced and became widely available. They were used for a variety of purposes, including fastening clothing, and diapers, and even as a tool for sewing and crafts. Safety pins have also been used as a fashion statement and symbol of rebellion. In the 1970s, punk rockers in London began wearing safety pins as a symbol of their anti-establishment attitude. The safety pin has since been used as a symbol of counterculture, punk rock, and rebellion. In more recent times, safety pins have also been used as a symbol of solidarity with marginalized groups, particularly immigrants and people of color.

Which celebrity was once famous for the controversial safety pin dress?

The celebrity who was once famous for wearing a controversial safety pin dress is Elizabeth Hurley. She wore a black Versace dress held together with large gold safety pins to the premiere of "Four Weddings and a Funeral" in 1994. The dress was designed by Gianni Versace, who collaborated with Elizabeth Hurley on the design of the dress. The dress was widely reported in the media and was considered a daring and provocative fashion statement at the time. It helped to establish Elizabeth Hurley as a fashion icon and helped to launch her career as an actress.

Safety pins are not typically considered a standard item in camping gear, but they can be useful for a variety of purposes while camping. They can be used to repair tears in clothing or gear, secure tarps or other coverings, hang clothes or gear, secure tent poles, and more. They are small, lightweight, and easy to pack, so they can be a handy item to bring along on a camping trip. Some outdoor gear stores also sell specially designed camping safety pins which are more durable and rust-resistant than regular safety pins, making them more suitable for outdoor use.

Can you carry safety pins aboard an international flight?

Safety pins are generally considered to be safe items to bring aboard an international flight. They are not considered to be a weapon or hazardous materials, and they are not restricted items. They can be packed in your carry-on or checked baggage without any issues. However, it's important to note that each airline and airport has its own set of security rules, so it's always a good idea to check with your airline or the Transportation Security Administration (TSA) before your flight to make sure that there are no restrictions or special requirements for carrying safety pins. It's also worth mentioning that, as with any item, safety pins should be packed in a manner that does not pose a risk to other passengers or the aircraft, for example, it's not advisable to pack them in a way that could cause injury.

Is there a cartoon or animation figure inspired by safety pins?

Email ThisBlogThis!Share to TwitterShare to FacebookShare to Pinterest
Labels: men who carry a safety pin, weird conclusions about manly behavior