Reasons why me and Mr. Waffles, representing all waffles known to mankind, are not getting along… 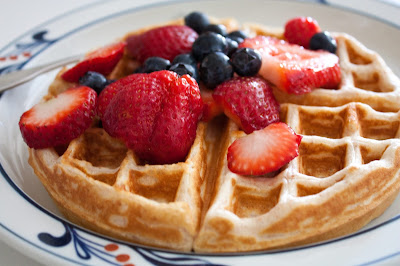 Okay, you like waffles and you believe that there can be nothing unlikable about them. However, the reality is different. There are plenty of folks like me who just cannot get their mind around what seems like a rehash of pancakes, baked cake-like stuff, and crusty pies. Waffles remain elusive to me in terms of having a taste, an individual flavor that separates it from the rest. Competitors here include many types of bread and bakery essentials like biscotti or cookies. A waffle is supposed to have a crusty exterior and the insides are supposed to be warmer and softer. However, the manner in which waffles are served these days means that the outer surfaces are already overwhelmed with many sauces and flavoring bits. The outside crust is already lost. The more you try to dice and mix up the fruits and creams, the more waffle is likely to lose its individualism, not that it really has a unique identity to preserve.

Unlike pancakes that can be eaten along with nearly anything that is mildly sweet or salty, waffles tend to break up and crumble too much. They don’t layer well. While you can wrap a pancake around many things, waffles tend to react very badly to being dissected and the insides are not what you want to eat when you have eggs, bacon, cheese, and syrups on the table. The grid pattern on waffles has not been experimented with to the extent that I had imagined. Each of those cubicles should have been decorated and structured with different toppings but mostly, waffles are served with a hell lot of stuff simply poured over it. The Europeans talk about pairing the waffle with different types of meats but if the waffle is even remotely thicker than the ideal measurements, it tends to overwhelm and impair the meat’s flavor.
Waffles are seldom made with different flavoring options added within the mixture to be poured and it is up to the accompanying accessories to bring out the different tastes that should arise from different combinations. Whether it is milky waffles, buttery waffles, extra-crispy waffles, syrup(ed) waffles, or those served with different types of eggs, none of them are easy to consume if you are trying to used them as a replacement for neat slices of bread. While pancakes are breads allow more fillings to be stuffed from either sides, waffles are the ideal choice if you want the insides to keep falling-out, often with irritating regularity….

Email ThisBlogThis!Share to TwitterShare to FacebookShare to Pinterest
Labels: do you hate waffles, how do i get over my dislike for waffles, reasons not to love waffles, waffles versus pancakes, why pancakes are better than waffles