Moha is on a Roll...Whoops! Was Talking about the 'Mohal Roll' 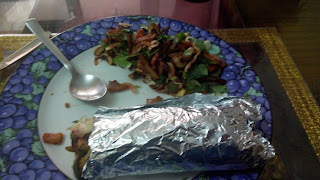 This is about smart cooking, passionate and driven by a desire to recreate recipes in a way that something as rushed as a Breakfast seems a more celebrated affair - something to look forward to! Moha had been observing how I have this keen interest in things that are rolled-up, filled to the curled brim with the goodness of veggies and leafy contents. The ideas were already rushing to her mind and recently she put them to good execution, creating a roll that had some very lovable traits.


- unlike the roomali roti roll where the bread is too bland and thin, the wheat-ful bread was thin, as thin as a thin-crust pizza and still very malleable 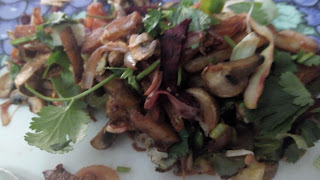 - we are in the middle of a cultural shift that is becoming more cheesy. However, Moha's version was less generous, using the cheese minimal only to create that luscious texture that I came across every 2 to 3 bites
- the veggies were cut to the smallest pieces, good enough to be used along with a binding agent, but not so tiny that they played around like a crazy football within the roll
- unlike the usual egg rolls, the egg layering was on the outside, not too crips as you don't want the exterior to crumble too much 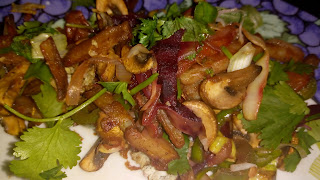 - bitting the Moha Roll was easy as the bread was soft without being stretchy and the filling was well settled, ensuring that messy eater like me did not spill things repeatedly
- rather than stuffing the canoe-like roll, the handful of mushroom-y filling was served as a type of side-dished, topped with fresh coriander
- This meant I actually had a reason to pause while gulping down the rolled beauty, using my fork to play around with the proud mushrooms, often combining them with beetroot slices, kind of skewering them through the fork's fangs
- using mushrooms was a great choice though Moha detests them. They are meaty and a mouthful when eaten along with other veggies
- no margarine, no dripping butter, not overdone with any creamy sauce that tends to overpower and undermine the flavor of fresh vegetables


The most recent creations for which I will be uploading freshly clicked images later, include: